Discovering you have got cancer

Towards the end of 2014, I discovered I had joined the growing number of people in the UK with cancer.

That number is likely to hit the 2.5 million mark this year, up 400,000 from five years ago, or so I read in The Guardian on 6 January while waiting for my second dose of radiotherapy at Middlesbrough’s James Cook University Hospital.

With so many of us around, it is reassuring to discover that there is an army of health professionals and volunteers ready and waiting to spring into action to help.

I was diagnosed with bowel cancer towards the end of 2014 and this blog is timed to start in the run-up to Bowel Cancer Awareness Month in April.

It is partly to say ‘thank-you’ to everyone helping us, but also to highlight the warnings signs of bowel cancer and the importance of telling a doctor if you discover something doesn’t look quite right!

In my case the only obvious clue that I might have bowel cancer was was seeing ‘red’ in my poo on a number of occasions and finally plucking up the courage to go and see the doctor.

Like most men, I didn’t want to appear too concerned about what might, of course, be nothing to worry about

But as I was about to head off to Austria to cover the annual conference of the European Universities PR network, EUPRIO, I thought I should get it checked out.

So, after skating around the main point of my visit and sorting out whether I still needed to take some tablets for some ancient ailment, I told the doctor after about spotting what might be blood in poo.

Dr Inder Basson, who has been my GP for years, immediately said he was glad I had mentioned this as it could be something important and asked whether I would like a consultant to see what was wrong.

I think I also mentioned that I was going to the toilet quite often, but attributed that to a gallbladder operation a few years earlier.

Anyway, shortly after getting back from the gathering of the EUPRIO clan in Innsbruck, I had my consultation session.

More than a ‘cosy’ chat

To my surprise, and slight shock, this turned out to be more than a cosy fireside chat.

I must admit, I was not prepared for a quick ‘examination’. I think my agitation must have shown as I really thought that sort of thing might come later if we decided a colonoscopy would be necessary.

Looking back I suppose I was in some kind of denial, despite knowing things could be serious.

Anyway, with some unease, I signed the consent form for the dreaded ‘camera’ examination – the colonoscopy – at a future appointment.

I still thought all I might be suffering from was haemorrhoids, which still didn’t sound very nice. I even turned down the first date offered for the colonoscopy to fit in with when one of my daughter’s was off work and could give me a lift.

So, it wasn’t until November 5th – fireworks’ night – that I arrived back at Teesside’s One Life Centre, where my GP surgery is also based, to face the camera.

My understanding of what the examination might entail was helped, or hindered, by the fact that my wife, Ann, was going through a similar procedure after a routine test indicated something might wrong for her in the same sensitive region.

Her colonoscopy was a few weeks before mine, and the results showed no signs of cancer. So I was hopeful, too!

Preparing for the colonoscopy

The day before your camera test, you have to take a mix of laxatives and something called Picolax.

And for the three previous days, you must stick to the most boring diet in Britain, with milk, wholemeal bread or pasta and vegetables all banned. Instead you should eat white meat and fish and boiled potatoes. Plain jelly and boiled sweets are also allowed!

The aim is to end up with a nice clean and empty bowel ready for some clear snaps during the colonoscopy or flexible sigmoidoscopy examination.

You learn a whole new language with cancer talk!

Anyway the colonoscope, really a video camera, isn’t as bad as it sounds.The clip art gives an idea of what is involved.

You are given sedatives intravenously, and they pump in air to ease the passage of the flexible fibre optic tube as it looks out for abnormalities, such as polyps, which can be removed and examined later.

You can even watch the whole thing on a screen. I declined the offer!

You will need someone to take you home afterwards, but I felt OK after half-an-hour and a cup of tea.

However, I was slightly confused with what the doctor was telling me. It sounded to me like I might have cancer, although my wife, who was also there, thought he was telling me I was probably all right.

Things were clarified a few days after my colonoscopy when my GP, Dr Basson, phoned to tell me things didn’t look good and some of the samples taken could be cancerous.

Within days I was in James Cook Hospital for an appointment with consultant surgeon, Doug Aitken, who asked what I thought was going on.

I said I thought I had cancer, but added that my wife wondered whether I might be just worrying too much. He indicated that I might be closer to the truth, but recommended a second colonoscopy the next day.

As this was early in the morning, he casually enquired whether I had eaten already. Unfortunately I had a full English breakfast an hour earlier.

So for my sins, I was given a double-dose laxative, which did the trick – and 30 hours later it was ‘camera, lights, action’ all over again.

Caught in a whirlwind

That proved conclusive and suddenly I was caught up in a whirlwind of CT and MRI scans and preparing myself for what I thought might be an operation to remove the cancerous bits before Christmas.

But, as I will explain in the next chapter of this blog, things don’t always go exactly to the original plan.

My best advice to anyone caught in similar circumstances is be prepared that things can change as scans and examinations reveal that the best course of treatment might not be the most obvious one.

Until the next time; when I’ll try to explain more about what the scans are like and why they, like the colonoscopy are best approached with confidence. Remember the examinations are only trying to help.

* HERE is my introductory blog starting off my ‘Cancer-talk’ and here is the next blog in the series. 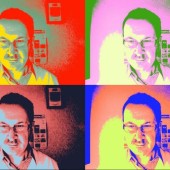 A year in the life of fighting cancer

Moving from being cancer sufferer to survivor